The Midstate Trail runs North/South from New Hampshire, across Central Massachusetts, to Rhode Island. The trail is well-marked with triangular yellow blazes, many on printed plastic tags. 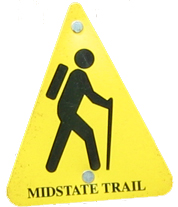 The following are from some of our hikes:

Troop 54 Trips on the Midstate Trail