A number of Scout camps have closed over the years. The following are some of the more recent closures in the area of our Outings Guide (New England and New York). 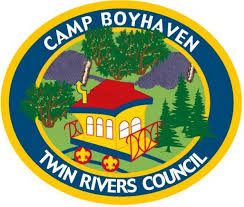 Camp Harrison Child was a Scout camp in Plymouth Massachusetts, operated by the Old Colony Council from 1925 to 1995. For location, it included Morey’s Hole. The 1970 merger of Old Colony Council with Squanto Council left the resulting OCC with one too many camps. This camp was sold in 1995 and became a residential development. The camp bell from Camp Child now hangs at Camp Squanto.

Camp Cochegan Rock was a 100 acre Scout camp in Plymouth, Connecticut. It was sold by the Connecticut Rivers Council to the Mohegan tribe in 2006.

Camp Cochipianne was a Scout camp in Goshen, CT operated by Bristol County / Nathan Hale Council from 1925 to 1975, acording to a display at the Lawrence Lee Scouting Museum. According to an article in WikiVisually, it was sold after the New Britain Area Council and the Bristol Area Councils were merged.

Camp Fellsland was a Scout camp in Amesbury, MA. According to a poster on display at Wa-Tut-Cah Scout Reservation in 2019, the camp was operated from 1932 to 1959 and was operated by the Fellsland Council. That was about the time the Minuteman Council was formed by the merger of Fellsland, Sachem and Quanapowitt councils.

Camp Massasoit was a 250 acre Scout camp in Plymouth, MA from 1927 to 2015. It was operated by the Quincy Council, then the Greater Boston Council (after the Quincy Council was absorbed into that council), then by the Boston Minuteman Council (after the merger of the Minuteman and Greater Boston Councils), according to a poster at Wah-Tut-Cah Scout Reservation in 2019. It appears to have been closed prior to that council's merger with Yankee Clipper Council to form the Spirit of Adventure Council. The camp's location was 4 Elbow Pond Rd, Plymouth, Massachusetts. According to an article, the camp was to be developed into The Residences at Elbow Pond, a housing development with really large lots. 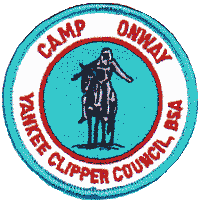 Camp Nahaco was a 120 acre Scout camp in Woodstock, Connecticut, owned by the Connecticut Rivers Council. Its entrance was at 305 Crystal Pond Rd, Woodstock, CT. It was sold to the towns of Woodstock and Eastford in 2003. It currently serves as a park for those towns, with the same name. According to a display at the Lawrence Lee Scouting Museum, the camp started as Camp Keemosahbee and was operated from 1919 to 2003 by New Britain Area / Keemosahbee / Nathan Hale / Connecticut Rivers Council (CT).

Camp Nihan was a Scout Camp in Saugus, MA. If was operated from 1929 to 1973 by the Bay Shore Council, then by the North Bay Council (result of the merger of the Bay Shore and North Shore Councils), according to a poster on display at Wah-Tut-Cah Scout Reservation in 2019. The camp is now operated by the Massachusetts Department of Conservation and Recreation as the Camp Nihan Education Center. Troop 54 camped there in 2015.

Camp Onway was a 110 acre Scout camp in Raymond, NH owned by the Yankee Clipper Council. It was sold in 2007 to the The Church of Jesus Christ of Latter-day Saints. The camp's address was 30 Onway Lake Rd, Raymond, New Hampshire.

Camp Plymouth was a Scout camp in Plymouth, VT, owned by the Calvin Coolidge Council / Ethan Allen Council of Vermont, operated 1936 to possibly 1977, according to a display at the Lawrence Lee Scouting Museum. According to the Camp Plymouth State Park web page, the property was operated as a Boy Scout camp from 1927 and later became the state park. The camp's address is 2008 Scout Camp Rd., Ludlow, VT.

Camp Portaferry was a 400 acre Scout camp owned by the Longhouse Council in towns of Pitcairn and Fern, NY. Its address was 1681 State Highway 3, Harrisville, NY . It was sold in June 2011 to developer Land First.

Camp Quinapoxet was a 180 acre Scout camp in New Hampshire, owned by the Cambridge Council. It was sold to the Mass Audubon Society in 2003 and now serves as their Wildwood Camp. Its entrance was probably located at about coordinates 42.766819, -71.969105 which corresponds to the address 497 Old New Ipswich Rd, Rindge, NH. According to a display at the Lawrence Lee Scouting Museum, this camp was operated by the Cambridge Council from 1925 to 2000. According to a poster on display at Wah-Tut-Cah Scout Reservation in 2019, that was the year Cambridge Council was absorbed into the Boston Minuteman Council.

Camp Quinebaug was an 80 acre Scout camp in Preston, Connecticut along the Quinebaug River. It was founded in 1931 and used for summer camp until 1963 when Camp Ashford (later renamed J. N. Webster) was opened to replace it. The property was sold in April 1966; today it is the Hidden Acres Campground, from which we can infer that the camp's location was 47 River Rd in Preston. The camp was founded by the Eastern Connecticut Council. All of this information came from a historical display created by Harry A Segerstrom Jr. at the Scout Museum at J. N. Webster SR. 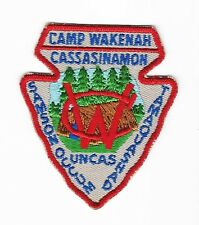 Camp Wakenah was a Scout camp located on Gardners Lake in Salem, Connecticut. It was built by the New London Council BSA in 1917 and crew from its initial 45 acres to 75 acres. The camp became redundant to J. N Webster after Eastern Connecticut Council merged with Pequot Council to form Indian Trails Council in 1971; summer camp endd in 1974 and the property was sold in 2003. All of this information came from a historical display created by Harry A Segerstrom Jr. at the Scout Museum at J. N. Webster SR.

Camp Cedarlands was a 4,300 plus acre Scout Camp in Long Loake, New York owned by the Revolutionary Trails Council. It had been acquired by the Scouts in 1963. It had two lakes and three mountains and was primarily forested wilderness with a 350-acre base camp and 10 primitive campsites. The camp's address was Kickerville Road, Long Lake, New York.

Our page on this camp.

Cochegan Rock Scout Camp was a camp in Montville, Connecticut, named for a large glacial erratic located on the property. The rock itself is located at coordinates 41.471050, -72.123394. The camp was formed some time in the 1960s and was sold by Connecticut Rivers Council to the Mohegan Indian Tribe in 2007, according to an article (Mohegans Buy Rock Sacred to Tribe, New York Times, 7/8/07). That council was the result of several mergers and at one point had eight camps.

Hemenway Base was a 600 acre Scout camp in Tanworth, New Hanmpshire, owned by the Knox Trail Council. It was located in the Hemenway State Forest.

Lake of Isles Reservation was a Scout camp in N. Stonington , Connecticut, from 1960 to 1993, owned by the Long Rivers Council of Connecticut. This information is from a display at Lawrence Lee Scouting Museum. 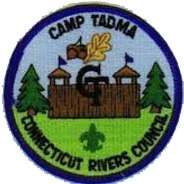 Mark Greer Scout Reservation was a 340 acre Scout camp in Bozrah, Connecticut owned by the Connecticut Rivers Council. Its Boy Scout summer camp was called Camp Tadma. The camp was sold to Revelation Church in 2015. The camp's address was 154 Bishop Rd, Bozrah, CT.

Stratton Mountain Scout Reservation was a 1,700 acre Scout camp in the Town of Stratton, Vermont, owned by the Governor Clinton Council of New York. According to a legal ruling, the most concentrated development centered around Grout Pond, which had a developed waterfront. According to a display at the Lawrence Lee Scouting Museum, this camp was operated from 1952 to 1976.

Woodworth Lake Scout Reservation was a 1,500 acre Scout camp in the towns of Bleeker and Johnstown, New York, owned by the Twin Rivers Council. At the time it was sold in 2013 to a home developer, its size was stated as 1,119 acres. The camp was last used for summer camp in 1992.