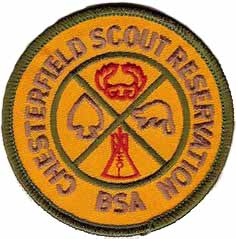 Chesterfield Scout Reservation was a 521 acre Scout camp in Chesterfield, Massachusetts, owned by the Western Massachusetts Council. Since about 2015, the council had been trying to sell the camp and for some time had not listed it as a facility available for use by Scout units. One challenge in selling the camp was that it is reportedly limited to use as a camp, and further development (e.g., construction of new cabins) is all but prohibited.

The camp no longer has a web page.

Camp Map from the Council