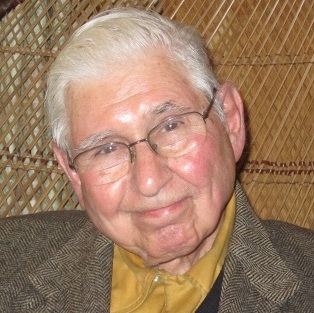 Donald W. Harris served as Troop 54 Committee Chair from January 1, 1978 until his death on April 20, 2015. He had been a leader in the troop since 1977. Mr. Harris published the troop's monthly newstetter, The Torch, for decades. During parts of his term as Committee Chair, he also served as our Friends of Scouting Chair for decades, as troop Treasurer and as Advancement Chair (for some time, all at once). For many years, Mr. Harris opened our meeting space, usually arriving hours early; every Scout could expect to be greeted by Mr. Harris immediately upon entering. He ensured that the troop' business moved forward, in part by visiting the Mohegan Council office on an almost daily basis. It had been Mr. Harris' fondest wish that he live to see the troop turn 100; unfortunately, he did not quite make it.

One interesting tradition the troop followed for many years, at Mr. Harris' behest, was the reversing of the flags. During the opening ceremony, the American flag and troop flag started in their regulation positions (American flag on its right). Two Scouts chosen by the SPL would then switch the positions of the flags just for the Pledge of Allegiance. After that, the Scouts returned the flags to their normal positions, saluted the SPL and returned to their places in the assembly.

Another tradition was to hold a court of honor on Friday at the end of Summer Camp. The Scouts would be completing merit badges right up to 4:30 PM. Mr Harris would sit in the hard shelter with his typewriter, typing up the forms, the merit badge cards and even the envelopes in which the badges were presented. This frenzy of badge buying and typing was something to behold. Every award would be ready by the court of honor right after dinner.

Mr. Harris served in the Korean War. For many years, members of Troop 54 were treated just before Memorial Day to in-person recollections by Mr. Harris of his time in the service. He always brought his collection of uniforms and insignia, willing to explain the meaning of every piece.

In his writing of The Torch, we got a taste for Mr. Harris' penchant for writing. Almost every issue included a long article about some famous person who struck his interest. You could tell when he was in his reporter mode by the insistent and rapid-fire questions he asked of everyone around him. The first day of summer camp each year usually featured some investigative reporting on the various camp staff. Even during his days as a Scout in Troop 8 at Wesley Methodist Church, Don Harris contributed to their troop newsletter, called "Pieces of Eight", as recalled by fellow Scout Harold "Jack" Jackson (who went on to become the Scoutmaster of Troop 8 and then a Scouting professional).

One of the most memorable aspects of Mr. Harris' reporting was his use of a manual typewriter to create The Torch. Long after such machines ceased to be sold, he was able to source ribbons for it to continue using it. This, together with real "cut and paste" technology set The Torch apart from other newsletters in the 21st century.

Mr. Harris was a member of the Masons and the Shriners

Biographical articles on Mr. Harris appear in the February 2002 issue of The Torch and the March 2014 issue of Troop 54 Informer.